DETERMINATION OF THE PHYTOCHEMICAL PROFILE OF MEDICINAL PLANTS

A fundamental role in the scientific systematization of phytotherapeutic, ethnobotanical and herbalist fields in general is played by phytochemistry, that sector of analytical chemistry that deals with the characterization of plant matrices. It is the development of reasonably rapid, selective and directly informative analytical methods on the identity of the analyzed substances thanks to the systematic use of mass spectrometers such as detectors.

The increase in knowledge that these techniques can bring with respect to the assets already acquired is important both in terms of completion of studies that have been partially carried out and in terms of opening new investigations on plant matrices that have never been taken into consideration so far from this point of view. Once the sufficient information regarding the constituents of the plan is collected, then the purification techniques of potential active ingredients can be developed.

Such purifications would allow to make available individual substances or significant fractions of constituents for subsequent clinical investigations, thus advancing studies connected with the identification of possible therapeutic properties in an orderly and effective manner.

A further effect, certainly not of minor importance, is that having reliable analytical methods makes it possible to set up a quality control of herbal and ethnobotanical products present on the market which can only offer benefits to the sector, that is currently not yet regulated and monitored.

For some years now, the Unit has been dealing with the phytochemical characterization of plant extracts from both equatorial plants (1, 2) and plants of the European herbal tradition (3).

More recently, the Moringa Oleifera plant was more closely investigated due to its widespread use in many parts of the world and to the recent attempts to introduce it as a source of herbal products or food supplements in the traditional Italian herbal sector.

Some details on the identity of this plant is therefore necessary to better define the research context.

The Moringa Oleifera is a typical plant of Indian medicine. It belongs to the order of the Brassicaceae and is one of the 14 known moringa species. Native of the South-Himalayan area in the North-East region of India, it is currently also cultivated in regions of Africa in Arabia, Southeast Asia, South America, Pacific Islands and the Caribbean, countries with typically equatorial climate and optimal temperatures for its cultivation (between 19 ° C and 35 ° C).

In recent years, the moringa has acquired great economic importance. Following some studies carried out on the plant, high concentrations of numerous essential nutrients have been found, such as vitamins, minerals, amino acids, carotenoids, antioxidants and Ω-3 and Ω-6 fatty acids. It has also been discovered that different parts of the plant, such as fruits, seeds, leaves, flowers, bark and roots all contain a good number of nutrients, but in different concentrations; leaves and seeds are the richest components.

It is extremely rare that a single plant can contain so many essential nutrients and, in such quantities, so the Moringa is considered the plant with the highest nutrient content discovered so far. For all these reasons, Moringa oleifera can be a remedy against malnutrition.

The fact that it is an easily cultivable and extremely resistant plant is a further advantage, especially if we think of an intensive cultivation even in climatically different areas from those of origin (both in temperate regions and in the arid and poor regions of the planet).

Furthermore, if stored properly (dried or frozen), Moringa can preserve its nutritional heritage for prolonged periods.

Besides the strictly nutritional aspect, the Moringa plant is widely used in traditional medicines of South America, Africa and India. In particular, the extracts of the leafy part are potentially rich in active ingredients.

The aim was to identify the geographical area capable of producing Moringa with the best nutritional profile and the richer phytochemical profile to evaluate the possibility of intensively cultivating it in areas of the planet with a lack of nutritional inputs.

Through the liquid chromatography technique interfaced with a UV detector and a high-resolution mass spectrometer, the phytochemical profiles of five samples of Moringa oleifera leaves in powder from different geographical areas were investigated, in particular two from Congo, one from Madagascar, one from India, one from Burkina Faso.

Aim of the study was to identify which of these samples had the best nutritional and medicinal characteristics and to understand what could be the factors that have most influence on the variability of the phytochemical characteristics.

The chromatographic profiles monitored in mass spectrometry (A) and in UV (B) of the Moringa leaf extract of Burkina Faso are shown below. 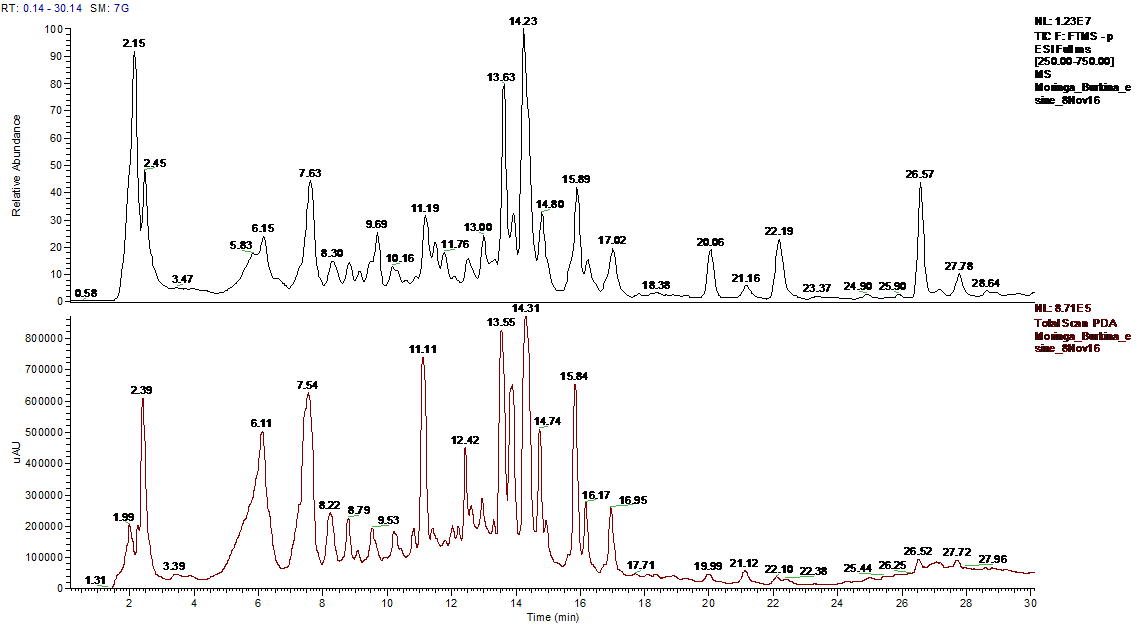 The following table shows a list of the substances identified with an indication of their presence (√) in the different samples.

The following table shows the nutritional profile in terms of carbohydrates, proteins and simple sugars from the various Moringa plants studied.

The best Moringa plants from this point of view were the one from Madagascar and the one from the Congo, denoted as Congo A.

Research projects: The unit has lived up to now using research funds available to Prof. Baiocchi and only recently it has been decided to work full time in the field of phytochemical research.

The expected future developments are as follows:

Composition of the Unit